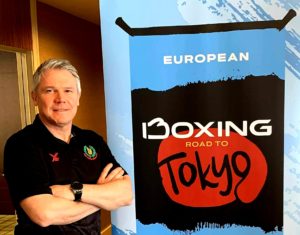 BOXING Scotland CEO Chris Roberts has said he is “overwhelmed, delighted and shocked” after being awarded an OBE.

The retired Major was made an Officer of the Order of the British Empire (OBE) in the Military Division of the Queen’s Birthday Honours for services to British Army Boxing.

Chris joined Boxing Scotland earlier this year after a career in Her Majesty’s Armed Forces, where he served for 30 years with the Royal Army Physical Training Corps, which included more than 20 years as a member of the Army Boxing Association Executive Committee.

The retired AIBA three-star boxing referee and judge has a wealth of experience within the sport, having served as a GB Boxing competition manager, supervisor, evaluator and instructor, while having also acted as the International Federation Liaison Officer for the European Olympic qualifier in London last year.

In addition to this, earlier this year Chris was appointed to a prestigious international position after being named the new Chairperson of the AIBA Referee’s and Judges Committee.

“When I got the call from Colonel AD Training Operations, my immediate thoughts were – he’s got the wrong number,” said Chris.

“Seriously though, I am absolutely overwhelmed, delighted and shocked all at the same time.

“The thought that someone or a number of people have gone out of their way to put pen to paper, that is something special.

“Never an easy process, with many out there who commit their time and dedication to support others in a sport or activity that they love.

“It certainly is difficult to describe the feelings I have right now but humbled by all of the great messages received over the weekend from so many fantastic people.

“I look forward to continuing to do what I enjoy, turning my hand from sport in the military, to supporting Boxing Scotland in the very same way, and more.”

Boxing Scotland Chair Kevin Bell congratulated Chris for his honour on behalf of the Governing Body.

Kevin added: “As we all know, these honours highlight the outstanding achievements and hard work of incredible people.

“I was delighted to learn that our own CEO was the recipient of such an award and my sincerest congratulations go to Chris on this worthy honour on behalf of myself and all of Boxing Scotland.”