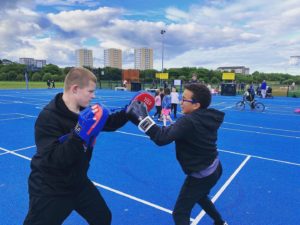 Over the last few weeks, the Northfield based club have been taking the sport on the road to some of the most deprived areas of Aberdeen, offering free boxing sessions to those aged 8-18.

The club received sponsorship to help purchase a trailer and equipment, which has allowed them to create a mobile outdoor boxing gym.

Coach Kevin Kerr said the project, which will run throughout the summer and hopefully beyond, will help allow youngsters across the city to get involved in the sport, as well as helping to reduce crime and anti-social behaviour.

“We currently have kids from Torry, Tillydrone and Seaton coming to the gym, but it is very hard with buses after school etc for them to come, so we thought we take the boxing club to them,” Kevin explained.

“The initial uptake has been really good. Two or three had previously done boxing, but basically apart from that they have all been beginners, which is good to see. 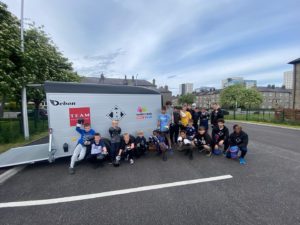 “Boxing reduces antisocial behaviour in the communities. Generally, when the boxing is on at our gym in Northfield, we find that that reduces the crime in the area that night.

“So we have reached out to these low-income areas and hopefully we can try and spread some positivity through the city.

“Tulloch Recruitment and Team Recruitment sponsored the trailer, and we have also been given funding by Northsound Cash For Kids, who bought the equipment. We have also tied in with TESCO in Woodend, who have donated fruit to the participants.

“We are also planning to deliver three boxing camps with local partners we are tying up with, scattered across this summer.”

The plan with the pioneering project is also to develop new volunteer boxing coaches, with interested young people aged 16-22 going through the process to become a registered Boxing Scotland coach.

“We are glad to be working alongside Boxing Scotland and trying to develop young people to make them better human beings, and with better social skills in the community,” Kevin added. 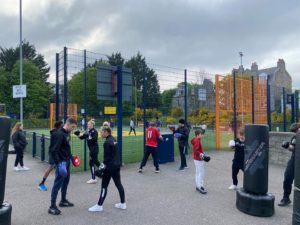 The Byron Street Boxing Project is being held on alternative Friday’s at the Tillydrone Community Campus, in association with the Lighthouse, and Seaton Community Church 4-6pm, as well as on Tuesday’s 6-7:30pm at the city’s Cruyff Courts, alternating between Catherine Street in central Aberdeen and in Torry, in association with Street Sport and the Denis Law Legacy Trust.

The trio of Western District Officials successfully met the qualification standards at the Haringey Box Cup at the Alexandra Palace in London last week.

The qualification means that the Scottish Officials now have the opportunity to officiate at the international level, in addition to district and national level.

Officials are fundamentally important to our sport, and quite simply boxing would not be able to operate in Scotland without these volunteers giving up their time week in and week out.

If you would like to find out more information about how to become an Official, please get in touch with your relevant District secretary (contact details below).

You do not need to be linked to a boxing club, know anyone in the sport or have had any prior involvement with boxing to become involved as an Official.

For those already involved in the sport, such as existing club coaches, you are also welcome to learn how to become an Official.

Members can now register for both roles, although they can only fulfil one role at any particular club show or Championship.

BOXING Scotland Performance Director and Joint National Coach Craig McEvoy says the Scottish squad for the Commonwealth Games are exactly where he wants them to be as they conclude a sparring camp in Spain.

The eight selected boxers for this summer’s Games, as well as a few other members of the Elite Boxing Group, have been training in Madrid in sweltering conditions of up to 40 Degrees Celsius, as the build up to Birmingham heats up.

The Scottish boxers have racked up more than two dozen rounds of sparring each with the Spanish national team, who just finished second in the EUBC European Men’s Boxing Championships medal table with five medals last month.

“We are in the final day of the Spain camp, which is basically sparring camp number one of three in the final lead up to the Games since the team was selected,” explained Craig.

“It has ticked every box required.

“Each boxer on average will have had 24/25 rounds of sparring, which has been a mixture of technical, tactical and open.

“We are exactly where we want to be and we are on track.

“It has been extremely hot conditions, especially in the first part of the camp when it was up to 40C at times.

“That just adds to the stimulus as well.

“It has been a great camp and the facilities are second to none here in Spain, everything is on site and it has delivered exactly what we wanted.”

The Schools results equal the success from last weekend’s GB Championships in Barnsley, where five Gold medals were won by Team Scotland in both the Junior and Youth categories.

A big congratulations to all of the boxers, coaches and clubs for the hard work they have put in over the 2021/22 season.

A big thank you also must go to all of the officials from this weekend, including those who travelled up from England and Wales.

ELEVEN Scottish boxers will go for Gold on the final day of the GB School Three Nations Championships today.

There will be 17 Finals in total at the Regional Performance Centre for Sport in Dundee, with Team Scotland contesting 11 of them against English and Welsh opposition.

The boxers will be looking to follow Insch’s Kian Tennant, who claimed the first Gold of the competition in the 90kg category on Day One.

Tickets can be purchased at the venue for £20, with doors opening from 11am.

The action will also be live-streamed on the ‘Boxing Scotland Official’ YouTube channel, in conjunction with JATV. The link for the stream will be published later this morning. 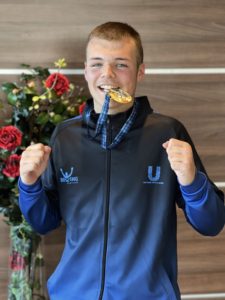 INSCH Boxing Club’s Kian Tenannt made it a golden finish for Team Scotland on Day One of the GB Schools Three Nations Championships.

The 13-year-old became the GB 90kg Champion after scoring a first-round stoppage against England’s Dominic Winters.

The victory concluded the day’s boxing, with Scotland securing victories in 9 of 21 bouts at the Regional Performance Centre for Sport in Dundee.

Kian’s bout was the only Final on Day One, with all of the other 20 bouts between Scottish, English and Welsh boxers being semi-finals.

The remaining 17 Finals will take place tomorrow, with the boxing getting underway from 11:30am, with 11 Scottish boxers going for Gold.

Tickets can be purchased at the venue for £20, with doors opening from 11am.

The action will also be live-streamed on the ‘Boxing Scotland Official’ YouTube channel, in conjunction with JATV.

The link for the stream will be published tomorrow morning.