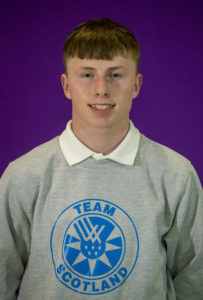 SCOTTISH Bantamweight Aaron Cullen made it a hat-trick of guaranteed medals for Team Scotland at the 40th Golden Gloves of Vojvodina Youth Tournament in Subotica, Serbia.

The Renfrewshire boxer defeated India’s Mehra Vishwas on points in his 54kg Quarter-Final this evening to ensure that he will box for a place in the Final tomorrow.

The teenager will be looking to try and win his third international Gold medal of 2022, after having won the Brasov Open Youth Championships in Romania in February and also claimed Gold at the Danas Pozniakas Youth tournament in Lithuania in March.

Those performances meant he was selected onto the Team Scotland Achieve 2022 programme this summer, which meant he travelled to the Commonwealth Games in Birmingham as part of a 66-strong group of potential future Commonwealth athletes and coaches from different sports to get a feel for a large Games environment.

Aaron joins Byron’s Sonny Kerr in the Semi-Finals of the competition, after a dramatic third and final round of his Light-Welterweight bout against home boxer Vladimir Berisa of Serbia.

The Aberdeen 63.5kg boxer landed a couple of shots after his opponent turned his back, which promoted the Serbian boxer to attempt to hit the Scot after break had been called and a member of the Serbian entourage storm the ring, resulting in a disqualification for the Serbian boxer.

Unfortunately, Rob Roy’s Isa Akram (60kg) and Springhill’s Josh Mullen (86kg) will not join them in action tomorrow, as they both lost their Quarter-Final bouts on points to Thailand’s Chakharin Aekpatcha and Serbia’s Marko Pizurica respectively.

However, Heavyweight Kian Govan (92kg) will be back in action tomorrow, after he won his Quarter-Final against Kazakhstan’s Nurzhan Duman on Thursday. 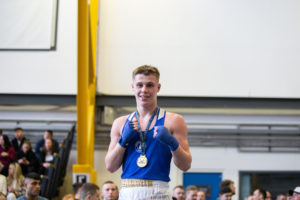 SPRINGHILL boxer Brandon Murray was the lucky winner of our £100 Seconds Out vouchers random prize draw.

The reigning Boxing Scotland Youth 2005 67kg champion was entered into the draw after completing our membership survey on Boxing in Scotland, which will help to shape the new four-year strategy of the governing body.

The Boxing Scotland Development Group boxer admitted the voucher will come in handy ahead of the new season, as he seeks to try and representative his country internationally for the first time.

“I wasn’t expecting to win, but I was looking for new equipment and I did need new equipment, so the £100 voucher will help a lot,” Brandon said.

“I will still be a Youth again this season, I actually had to step up to 67kg last season as there was no-one at my weight, but this season I plan to win the 63.5kg Scottish title.

“I have been training with the Boxing Scotland Development Squad Tuesdays, Wednesdays, Thursdays and Saturdays and I feel it has helped me a lot and helped my fitness.

The Heavyweight secured an impressive victory over Kazakhstan’s Nurzhan Duman in their 92kg Quarter-Final bout.

Govan, who has already won an international medal this year after winning Silver at the Gergely Bornemissza Boxing Tournament in Hungary, will box for a place in the Final on Saturday.

Kian inflicted a standing count on his opponent en-route to victory, as did Rob Roy’s Isa Akram as he defeated Serbia’s Radovan Gligic on his opponent’s home soil.

The 60kg boxer will now face Thailand’s Chakharin Aekpatcha in a Lightweight Quarter-Final bout tomorrow as he seeks to join Govan on the podium in Serbia.

Unfortunately, there were defeats for Forgewood’s Andrew Sneddon (51kg) and Meadowbank’s Esosa Osemwegie (75kg) in Serbia earlier this afternoon.

Sneddon put up a good showing as he lost a close contest on points to cagey French southpaw Christopher Hippocrate, while Osemwegie also lost to French opposition after a third round RSC to Yojerfin Cesar.

Team Scotland will have four boxers in action again on Day Three of the competition tomorrow, as Renfrewshire’s Aaron Cullen and Springhill’s Josh Mullen make their debut in the competition.

Byron’s Sonny Kerr will also be in Quarter-Final action, after he defeated Finland’s Johannes Suhonen on the opening day of the competition. 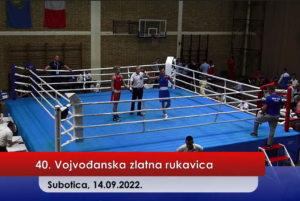 BYRON Boxing Club’s Sonny Kerr has progressed to the Quarter-Finals of the 40th Golden Gloves of Vojvodina Youth Tournament in Serbia.

The Aberdeen boxer defeated Finland’s Johannes Suhonen to cap a mixed opening day of the competition for Team Scotland in Subotica.

Sonny will now box home boxer Vladimir Berisa of Serbia for a place in the 63.5kg Semi-Finals on Friday.

The teenager will be hoping to produce another performance like he did this afternoon, as after a close first round against his Finnish opponent, he dominated the second and third rounds.

The Aberdonian was making his opponent miss wildly, while he caught him with counter-punches being thrown from his waist, as he boxed in his usual relaxed style.

THE draw has been made for this huge tournament in Serbia featuring 200 boxers from 21 different countries and three of Scotland’s squad of nine will be competing on the opening day of the competition on Wednesday (September 14th). 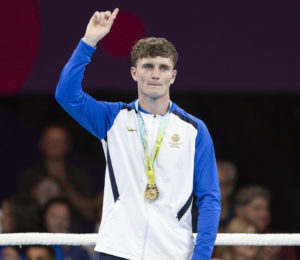 COMMONWEALTH Games champion Sam Hickey say he is relishing the challenge of moving up to a new weight class.

The Lochee boxer is back training in Sheffield with the GB Squad following his 75kg Middleweight Gold medal success in Birmingham this summer, where he was also named the Male Boxer of the Tournament.

However, the traditional weight class has been removed from the Paris Olympics in 2024, meaning the 22-year-old will have to go up 5kg to Light-Heavyweight if he wants to become the first Scottish boxer since Josh Taylor a decade ago to qualify for the Olympics.

“When I got told a wee while back I thought surely not,” Hickey told the Enhanced Performance Podcast, upon hearing the news that Middleweight will not be a weight class at the next Olympics, with some male weight classes being dropped to make way for more female weight classes.

“Surely they can’t be taking out the average sized man’s weight, which is Middleweight.

“When I went back down to Sheffield I spoke to Rob (McCracken) and he said you are probably going to be an 80kg boxer anyway if you think about it.

“I am not too fussed, I will fight anybody.

“Bringing myself out of my comfort zone a wee bit by moving up in weight I think is going to be good for me.

“I am going to be a lot faster than these guys and I have so much skill, I just need to bring that into this new weight and show everyone that they can’t keep up with the pace and skillset together.

“Since I went to Sheffield I am so much fitter.

“I always had talent, and now I have the fitness to go with it, it is putting me to new levels.”

For the first time ever, Scotland has four boxers on the GB Boxing Squad in Sheffield, with Hickey and fellow Commonwealth Games Gold medallist Reese Lynch returning to training this week alongside long-term squad member Aqeel Ahmed.

The largest group of Scots training in Sheffield comes on the back of our most successful Commonwealth Games with five medals won – with Sean Lazzerini also winning Light-Heavyweight Gold and Matthew McHale taking Bantamweight Bronze.

Sam believes the recent success is testament to the Boxing Scotland Performance Pathway programme, which was introduced by Performance Director Craig McEvoy following the Commonwealth Games in Australia four years ago.

“The Boxing Scotland programme gets a lot of stick for I don’t what,” Sam added.

“But this Commonwealth Games, and me winning a European medal – the first in 16 years – and Reese Lynch winning a World Bronze medal – Scotland’s first ever World medallist last year – the programme is a success and is working.

“All these people who have a bit to say about the programme, what can they say now after Scotland’s best ever medals in a Commonwealth Games.

“Our results are a testament to the programme.”

Sam Hickey’s full interview on Episode 7 of the Enhanced Performance Podcast can be found on Spotify and other audio providers.