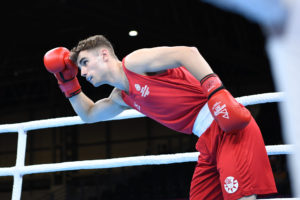 RECORD breaker Tyler Jolly will be aiming to make another statement in the ring when he boxes to guarantee a medal at the Commonwealth Games this afternoon.

The Welterweight will be the last of three Scottish boxers to compete in a Quarter-Final bout at the NEC in Birmingham today, as Team Scotland eye another triple success.

Flyweight Lennon Mulligan will be the first Scot in action, closely followed by Bantamweight Matthew McHale before Jolly has his second bout in the competition.

The 23-year-old was barely in the ring in the Round of 16 as he scored what is officially the fastest knockout in Commonwealth Games history against Jamaica’s Daniel Hylton.

The Whithorn boxer landed a left-hook to the body after only 11 seconds which left the Jamaican crumpled in a heap, with the bout officially being called off by the referee at the 20 second mark.

Jolly will be aiming to impress again when he boxes Neville Warupi of Papua New Guinea in their 67kg Quarter-Final bout at approximately 2:15pm.

“I think I made my mark,” Tyler said of his quickfire win in the previous round.

“I was extremely confident before the tournament and even more so now.

“This is my time.

“I have paid my dues and been to tournaments for experience.

“I am not here for experience – I am here for the Gold medal.”

Castlemilk’s Lennon Mulligan will be the first Scot in action at approximately 12:15pm and will face a tough test against India’s 2019 World Championship Silver medallist Amit Panghal.

However, the Scottish Flyweight is in confident mood after claiming his first victory at a major international tournament in the Round of 16, when he comfortably outboxed Kiribati’s Eriu Temakau.

“It will be a good fight,” the 20-year-old said of his Quarter-Final.

“He has got a hard test in me, I am ready to beat any guy in front of me.

“I lost my first fight in the Worlds and senior Europeans, so to have got a win in front of a good crowd is brilliant.

“It is good for the confidence and I am ready to get the win in there.”

Finally, Edinburgh’s Matthew McHale is in bullish mood ahead of his bout against Malaysia’s Ahmad Shaharom, which will come immediately after Lennon’s at approximately 12:30pm.

The Bantamweight was cruelly denied a guaranteed medal in his last major international Quarter-Final at the European Championships in May, when despite looking to have done enough, he didn’t get the nod against Italy’s two-time Olympian Manuel Fabrizio Cappai.

“I’m not coming to another tournament without guaranteeing a medal,” the 26-year-old said.

“I will just be myself.

“It is another live opponent, I don’t know anything about him.