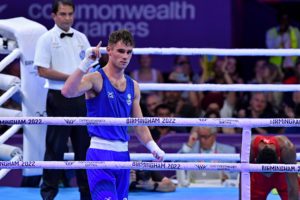 TEAM Scotland secured their highest boxing medal haul in 36 years at the Commonwealth Games after another fantastic afternoon in Birmingham.

Matthew McHale and Tyler Jolly both booked their places into Saturday’s Semi-Finals, following on from yesterday success with Reese Lynch, Sam Hickey and Sean Lazzerini.

Only on three other occasions in the 92-year-history of the Commonwealth Games have Scottish boxers secured more medals.

Welterweight Jolly was the last of the five Scots to guarantee himself a medal, although he had to get up off the canvas in order to do it.

The Whithorn boxer was knocked down for the first time in his career by Papua New Guinea’s Neville Warupi in round two of their 67kg Quarter-Final with a looping right hand.

Jolly had secured the quickest knockout in Commonwealth Games history against Jamaica’s Daniel Hylton in the previous round, but was made to go the distance this time.

The 23-year-old outboxed Warupi in rounds one and three to take a unanimous decision and move into the Semi-Finals, where he will face Welsh boxer Ioan Croft. 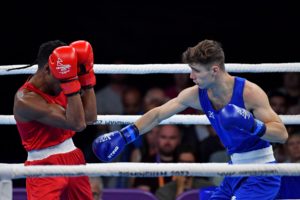 “I made it tough for myself,” Jolly said.

“The first round I won easy – I hurt him and I got excited.

“I jumped into a cracking right hand, it was a peach of a shot.

“But I wasn’t hurt, I jumped up off the ground and laughed.

“I was straight back up and back to business.

“I just got excited and jumped in stupidly.

“That was my first ever knockdown, but it is boxing, it is going to happen.

“Everybody gets knocked down, it is how you get back up and deal with it. 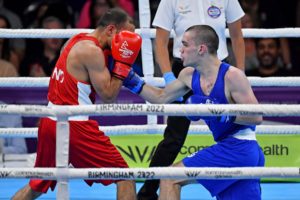 Another boxer who showed tremendous heart was 20-year-old Flyweight Lennon Mulligan, in the opening Scottish contest of the day.

“I am just devastated,” Lennon said.

“I thought I did really well in there and gave it my all, but the better guy won.”

In the ring immediately after Lennon’s contest was Bantamweight Matthew McHale, who produced one of the performances of the tournament to stop Malaysia’s Ahmad Shaharom in the third round of their Quarter-Final.

The 26-year-old forced two standing counts, before the referee finally ended the one-sided contest in the final round, with the Edinburgh boxer repeatedly tagging him with the straight right hand. 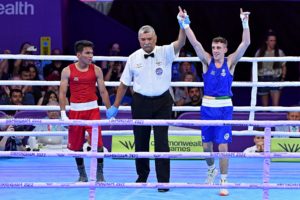 McHale received a hug after the bout from Lochend stablemate Josh Taylor, who was watching on from the front row, and now progresses to Saturday’s 54kg Semi-Finals, where he will box Northern Ireland’s Dylan Eagleson.

“I thought the referee was going to stop it after the second count,” McHale said.

“The boxer didn’t want to be there and I knew that.

“But all credit to that boy, he stepped in and gave it the best he could give it.”