IT WAS Super Sunday in Birmingham, as a Golden Generation of Scottish boxers were born at the 2022 Commonwealth Games.

Team Scotland landed three Gold medals after magnificent victories for Sam Hickey, Sean Lazzerini and Reese Lynch in the ring at the NEC.

It was three out of three in Finals today, as Scottish boxing added to its rich history in the Commonwealth Games.

Scotland went into the competition with a 92-year streak of having won at least one boxing medal at every single edition of the Games – the only Scottish sport which can boast that remarkable feat.

But never before have three Gold medals been won at one edition, with the class of 2022 surpassing all who have come before them.

Bronze medals for Bantamweight Matthew McHale and Welterweight Tyler Jolly added to the glory, with it being Scotland’s biggest medal haul in 36 years as five medals will be brought North of the border in total.

But to have three Champions is a feat that has never been matched, and might not be equalled for a long, long time.

Dundee Middleweight Sam Hickey got the ball rolling at 11:45am, as he engaged in an all out war with Australia’s Callum Peters.

The 22-year-old has boxed brilliantly at times in this competition, but he decided to engage in a back and forth scrap with the Australian, as he desperately looked to ensure he won his first major Gold medal, having previously won a string of Bronze and Silver medals at international competitions.

The tactic could have backfired as the Aussie came on strong in the last round, but the Lochee boxer had done enough in the opening two rounds to take a 3-2 split decision. 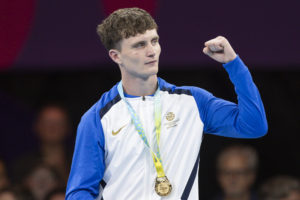 “It has finally come and I am just so happy,” said Hickey.

“I am so proud to represent my country.

“It is such a buzz to do it here on such a great platform with everyone watching back home and across the UK.

“Sometimes it is a mental challenge for me.

“When I was younger I used to struggle and I would go in the ring and wouldn’t perform.

“But I have been on form the last two years and haven’t had a bad performance.

“I showed today that I have finally got to the top of the podium.”

The next bout up in Birmingham, bar a 15 minute gap for a medal ceremony, was Light-Heavyweight Sean Lazzerini as he made it two Golds in under an hour for the Scots.

The 25-year-old produced another clever boxing display to beat power-puncher Taylor Bevan of Wales via a 4-1 split decision.

Lazzerini won the opening round behind his jab, before the Welsh boxer came back into it in the second round. 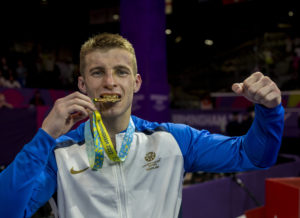 “I said on Day One when I came back from injury that I was coming for everybody and I did exactly that, I back it up,” Lazzerini said.

“I proved a lot of people wrong.

“A lot of people turned their backs on me and gave up on me.

“I came back and proved everyone wrong and proved it to myself most importantly.”

In the Afternoon session, Reese Lynch completed the historic hat-trick of Gold medals for Scotland in Birmingham.

Reese becomes the first Scottish Light-Welterweight Gold medal winner since Josh Taylor, and it was another former Glasgow 2014 Taylor opponent in the final, after having defeated defending champion Jonas Junias Jonas of Naminia in the Quarter-Finals, who Josh also beat eight years ago.

Lynch outboxed the Mauritian over the opening two rounds to give him a commanding lead on the scorecards going into the last round.

Scotland’s sole World Championship medallist just needed to see out the final round with no drama.

That went out of the window, however, when a head clash opened up a cut at the top of the Scot’s head early in the third.

He was also caught with a late straight from the 35-year-old veteran that forced a standing count right before the final bell.

Reese lost the last round from four of the five judges, but in truth the decision was never in doubt as his class shown through in the first two rounds, winning with scores of 29-28, 29-28, 29-28, 29-28, 28-29 and capping an unforgettable day for Scottish boxing. 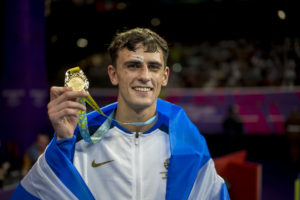 “I got there and I done it the hard way,” Lynch said.

“I will be able to say that I got the Gold medal the hard way for the rest of my life.

“I am absolutely buzzing to be honest, I beat four Olympians to get here.

“I beat some of the top boys, the Indian was amazing and had five Asian medals and World medals.

“I have beat the best boys at the weight to get here, and I am happy with my performances.”