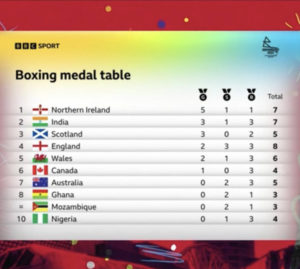 TEAM Scotland’s phenomenal exploits in the ring at the Commonwealth Games has been rewarded by finishing above host nation England in the medal table for the first time in 60 years.

The English team in Birmingham had a boxing squad almost twice the size of the Scots, with 14 members as opposed to eight Scottish boxers.

But it was the Scots who showed them how it’s done South of the border at the NEC, with five medals in total – our second biggest medal haul in 52 years.

Bantamweight Matthew McHale and Welterweight Tyler Jolly both won Bronze as they lost in the Semi’s to the eventual champion at their weight, while Sam Hickey (75kg), Sean Lazzerini (80kg) and Reese Lynch (63.5kg) all won Gold medals on Super Sunday.

Scotland finished third in the boxing medal table out of the 55 nations who entered boxers at the 2022 edition of the Games, with only Northern Ireland winning more Gold medals.

The last time Scotland finished above England was in the 1962 edition of the Commonwealth Games, held in Australia, when Flyweight Bobby Mallon and Featherweight John McDermott both won Gold, Light-Welterweight Dick McTaggart won Silver and Light-Heavyweight Tom Menzies won Bronze.

But the class of 2022 have surpassed all teams who have come before them, by becoming the first Scottish team to win three Gold medals at a Games.

Boxing’s impact can also be seen by the fact boxing accounts for almost 25% of Team Scotland’s entire Gold medal haul in Birmingham from the 20 different sports that are competing, with Scotland winning 13 Gold medals across all sports.