TEAM Scotland will aim to make another statement in the boxing ring in Birmingham today.

The Scottish boxing team have already caught the attention of the sporting world with a string of stunning performances so far at the Commonwealth Games.

Five Scots, from a team of eight boxers, have already secured medals, as they prepare to fight their way deeper into the competition and reach the Final.

Only once in the past 52 years has the Scottish boxing team secured more medals – back in 1986 at the Games held in Edinburgh, when the majority of Commonwealth nations boycotted the event due to the British Government’s policy of retaining sporting links with apartheid South Africa.

It is a truly fantastic achievement, with all five boxers scoring a stoppage along the way – including the fastest of all time at the Commonwealth Games via Tyler Jolly.

But Boxing Scotland Performance Director and Joint National Coach Craig McEvoy insists the team is aiming for much more.

“It is good, but the job is not done yet,” McEvoy said.

“We are in a good place and the boxers are boxing with flair, they are boxing at their best and performing well.

“We have five in the medal stages and are happy, but the job is not done.

“We want boxers into the Finals, simple as that.”

Dundee Middleweight Sam Hickey will be first to the ring in the NEC at 12pm, as he faces a Semi-Final rematch against England’s Lewis Richardson, who beat the Scot via 4-1 split decision in the Semi’s of the European Championships in May.

The English boxer, who is a teammate of Hickey’s on the GB Squad, will be the third southpaw opponent of the tournament for the 22-year-old, who has easily overcome St Lucia’s Kyghan Mortley and Nigeria’s Adeyinka Benson so far. 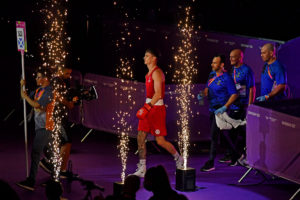 “I am not worrying about any of my opponents,” Hickey said.

“Me and Lewis are pals out of the ring, we have sparred loads of rounds.

“The fight at the Europeans was close, but I am just going to worry about myself.

“If I box to the best of my ability, I know I can get the win here.

“I have had the best preparation behind me that I have had for the last year and a half.

“It might be a bit of practise for Lewis, both guys I have boxed have been southpaws.

“It has given me a bit of practise going into that fight.

“But Lewis is a bit different from these lads, he doesn’t make no mistakes and you can’t make any mistakes in there with him as he is a good operator.

“But we will see what happens.”

Light-Heavyweight Sean Lazzerini will be second in the ring for Scotland at 12:30pm, when he boxes Yusuf Lucasi Changalawe of Tanzania. 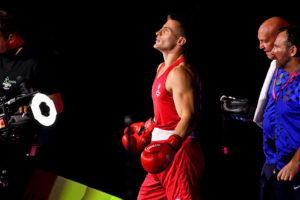 The Scot is known for his power, having won Commonwealth Youth Games Gold in 2015 by stopping all of his opponents in the first round.

However, the 25-year-old has instead used his boxing skills to comfortably defeat Jean Luc Rosalba of Mauritius and Keven Beausejour of Canada.

“It is good, but I am not happy yet,” Lazzerini said.

“I am going for Gold and then I will be happy.

“Tanzania is getting it now, that’s it.”

Bantamweight Matthew McHale will be the third boxer in action for Scotland at 3pm, when he boxes Northern Ireland’s Dylan Eagleson for a place in the 54kg Final. 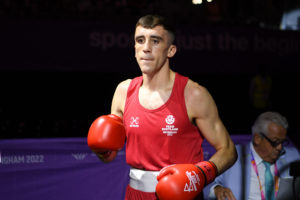 The 26-year-old had to fight back from trailing on the cards against Jabali Breedy of Barbados in the Round of 16 to win a 3-2 split decision, but looked exceptional when stopping Malaysia’s Ahmad Shaharom in the third round of their Quarter-Final contest.

“I am in my stride now,” the Edinburgh boxer said.

“It took me a fight, but now I am there.

“It is good to have a medal in the bag, but we ain’t here for Bronze, we are going to change that colour now baby.”

Light-Welterweight Reese Lynch certainly made a statement in his Quarter-Final, when he outboxed defending Commonwealth Games champion Jonas Junias Jonas of Namibia.

The 21-year-old, Scotland’s only World Championship medallist, will face his fourth bout of the competition when he boxes Canada’s Wyatt Sanford in the 63.5kg Semi-Finals at 4pm. 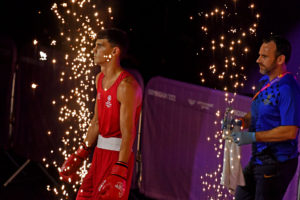 “As I said in the ring, I am here to make statements,” Lynch said.

“I am here to get that medal and prove to everyone why I am going to win Gold.

“It is brilliant, you dream of getting a medal.

“But it is only Gold I am going for now.

Last, but not least, will be Welterweight Tyler Jolly, who faces a tough 8pm test against Ioan Croft of Wales, who won a European Bronze medal earlier this year.

The Welsh boxer is one half of a pair of boxing twins, along with Light-Middleweight brother Garan, and holds a victory over the Whithorn boxer from a tournament in Lithuania last year.

However, the 23-year-old Scot has had a memorable tournament so far, scoring the fastest knockout in Games history against Jamaica’s Daniel Hylton in the prelims, before climbing off the canvas for the first time of his career to outpoint Neville Warupi of Papua New Guinea in the Quarter-Finals. 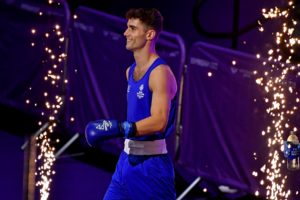 “He is a very skilful boxer, he is brilliant at the basics,” Tyler said of his Semi-Final opponent, who he will soon join up with on the GB Boxing Squad.

“But it doesn’t matter who is in my way, I am going all the way.

“I am here for the Gold medal and whoever is in my way is going to get beat.

“I boxed him last year and I have to hold my hands up and say it was one of my worst performances to date.

“I wasn’t switched on and I wasn’t fit.

“No excuses, he beat me on the day.

“But at my worst it was close.