TEAM Scotland will have three boxers go for Gold tomorrow after another rollercoaster day at the Commonwealth Games in Birmingham.

Middleweight Sam Hickey, Light-Heavyweight Sean Lazzerini and Light-Welterweight Reese Lynch all won their Semi-Final bouts in the afternoon to go through to tomorrow’s Finals at the NEC.

Unfortunately, Bantamweight Matthew McHale and Welterweight Tyler Joly both lost out on close split decisions to exit the Games in Birmingham with a Bronze medal.

The pair can take tremendous pride in their performances, both today in the Semi-Finals and earlier in the competition, as they helped Scotland win their biggest medal haul at a Commonwealth Games in 36 years.

But for Sam, Sean and Reese there is one more bout to go as they have the opportunity to become Commonwealth Games champion. 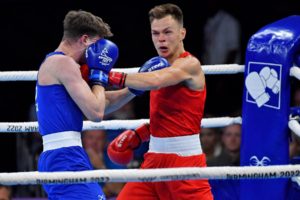 Dundee’s Sam Hickey started the day in some style on the outskirts of Birmingham, as he gained revenge on England’s Lewis Richardson with a stunning second round knockout.

The 22-year-old had lost to his GB teammate on a split decision in the Semi-Finals of the European Championships three months ago in Armenia, as he became the first Scot in 16 years to medal at the senior Europeans.

But it was a very different story in Birmingham, with the Lochee boxer walking the English boxer on to a huge straight right hand halfway through the second round, with Richardson crashing to the floor before the referee waved it off with him still on unsteady legs, despite beating the count.

“I am buzzing to be able to showcase my skills these last couple of weeks, and that performance just topped it,” said Hickey, who will now face Australia’s Callum Peters in tomorrow’s final at 11:45am.

“But I have got one more to go and I am going to do it.

“I said to everyone in the camp that this crowd was going to benefit me more than Lewis.

“Lewis is an amazing boxer on the backfoot, but in his last few fights he has been getting involved and fighting a bit, and that suits me.” 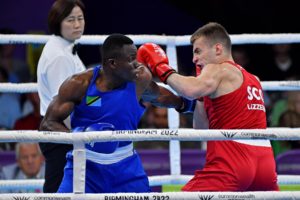 It was soon to be two Scots into the Finals, as just 15 minutes after Hickey exited the ring Sean Lazzerini entered, with the Barrhead boxer producing another clever boxing display to book his place into tomorrow’s Finals.

The 25-year-old boxed his way to a 4-1 split decision against Yusuf Lucasi Changalawe of Tanzania, and will now face Wales power-puncher Taylor Bevan in the 80kg Final tomorrow at 12:15pm.

“This guy was quite good, I think this will be the best guy I fight in the tournament to be honest.

“He was strong so I didn’t want to rush in and get caught myself.

“I had a game plan going in, I had to make a few adjustments, but we got the win at the end of the day.

“I was a bit shocked when they said it was a split decision, as I rocked him in the last round.

“But I felt there was only one winner to be honest, and I felt the guy knew that as well.” 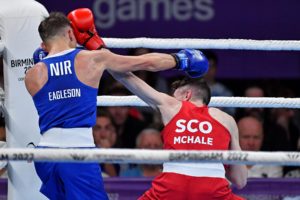 Matthew McHale would be the third Scot in action, as he suffered a close 3-2 split decision defeat to Northern Ireland’s Dylan Eagleson to exit the Commonwealth Games with a Bronze medal.

But Reese Lynch would soon make it three Scots into tomorrow’s Finals as he outclassed Canada’s former Olympian Wyatt Sanford, winning every round from all five judges at ringside in their 63.5kg Semi-Final, although he was harshly deducted a point for holding in the second round.

Reese will now face Richarno Colin of Mauritius in tomorrow’s final at 3:15pm – his second opponent of the Games who also happened to box fellow Scot Josh Taylor in Glasgow in 2014, on his way to winning Gold on home soil.

The reigning Light-Welterweight World champion beat Colin in the Round of 16 eight years ago, while Lynch has already comfortably beaten the man who Taylor beat in the Final at the Hydro, Namibia’s Jonas Junias Jonas, in this summer’s Quarter-Finals. 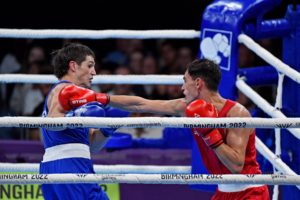 “It is brilliant to get here and get to the final beating the top class competitors that I have beat,” Reese said.

“It has been three World class boys and I have come through it and I’m here in the final tomorrow.

“He was strong and I was probably holding my feet a bit too much in the first round.

“It wasn’t actually until I got the point off that I got up on my toes and was picking him off.

“It was kind of a slow start and holding my feet too much. But once I got up and started moving and picking the shots and dancing around about him, I had fun and was enjoying myself.” 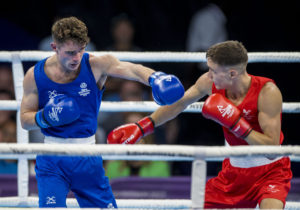 Welterweight Tyler Jolly was the last Scot in the ring in the evening session, as he lost a very close split decision to Welsh boxer Ioan Croft.

In a bout which could have gone either way, the 23-year-old was on the wrong end of a 4-1 decision from the judges to exit the Commonwealth Games with a 67kg Bronze medal.