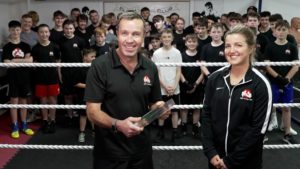 Congratulations from all at Boxing Scotland to Elgin Boxing Club coach Paul ‘Ratch’ Gordon after he won the 2021 BBC Sports Personality of the Year Unsung Hero award.

Ratch has been the Head Coach at the North District club for 13 years, as well as assisting Boxing Scotland with coaching as part of the Performance Pathway Programme.

The 51-year-old was nominated for the award by his daughter Megan, who herself has boxed for Scotland and represented the country at the 2018 Commonwealth Games in Australia.

“I’m delighted the club members think so highly of me, but this really is a team effort,” said Ratch, who volunteers at the club five days a week, in addition to his full-time job as an electrician at Chivas whisky distillery.

“We have a great mentality at the club where everyone is treated the same.

“We’ve had good successes – including district and national champions and my daughter, Megan, who represented Scotland at youth and senior Commonwealth Games.

“But the champions are treated exactly the same as any kid who has just come into the club for the first time.

“It’s very rewarding seeing kids, male and female, develop with the club. It’s not all about winning medals and championships.

“As a coach you thrive on all the successes, whether that’s seeing one of your boxers win a title or seeing the improvement in a kid who has not had the best time at home or a kid who just wants to get fit.

“They’re all treated the same and if they see us coaches giving 100 per cent, they’ll do the same.”

In addition to his long service to the club, where he started coaching in 2007, Ratch was nominated for the work he did to keep club members active during the Covid-19 pandemic.

“When this lockdown started, I thought it would be three or four weeks before we’d be back at the club. Little did I think how long it would be,” added Ratch, who is originally from St Helens but moved to Moray in 1999 when he was posted to RAF Kinloss.

“So we did Zoom and Messenger training sessions to keep people going. We sent training programmes out to people as well.

“Once lockdown meant you could meet in person, the guys were coming to Rothes to train at the park, running up the hills round us and training in our back garden while still keeping social distancing.

“We went up Ben Rinnes numerous times and trained up there.

“I think that’s why I got nominated, due to the input of that.”

Ratch will now go forward to the 68th BBC Sports Personality of the Year Awards at Media City Salford on 19 December, where he will be joined by winners from Wales and Northern Ireland and from 12 English regions for a shot at securing the overall UK Unsung Hero award.