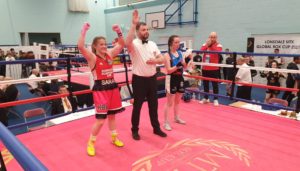 INVERNESS teenager Sarai Grant admits she has surprised herself at how much she has progressed in the sport so far.

Sarai only took up the sport in May 2019 when HBA Head Coach Liam Foy stopped her in the corridor of Inverness High School and encouraged her to come along to a free female boxing class.

The sessions were the first of 20 Active Schools sessions that Highland Boxing Academy would hold in four Inverness schools between May-December 2019 as part of the Boxing Scotland Woman and Girls Fund Project, after the governing body had successfully received £13,600 of funding from sportscotland to increase female participation in the sport.

Just nine months on from throwing her first punch as part of the Woman and Girls Fund project, Sarai became Scottish champion at the Boxing Scotland School and Junior National Championships in February 2020 – and now she has added an international competition victory to her growing list of accomplishments.

“It is a surprise to me how far I have got in such a small space of time,” Sarai said.

“Liam works in my school as a teacher – I was walking down the corridor one day and he stopped me and asked If I wanted to come along to the boxing.

“I thought I might as well. I tried those classes and I liked it.

“Liam thought I had potential so wanted me to go to other club classes.

“I probably wouldn’t have gone otherwise.

“Liam then asked my Mum if I could start sparring. I remember thinking “Oh, I’m not sure about this”.

“But I tried it and I liked it, so I just continued sparring.

“Liam then asked if I wanted to fight, so I did.

“My first bout was at the Novice Championships, where I lost by unanimous decision.

“However, I faced her again at the School and Junior Championships a few months later and I beat her.”

Despite her impressive start in the sport, Sarai revealed that due to a long lay off because of the coronavirus pandemic, she considered not returning to the sport.

However, after some encouragement from coach Liam Foy, she made her comeback by defeating Demie Mayers of Manx ABC to scoop the 60kg Gold at the MTK Global Lonsdale Box Cup.

“I wasn’t training much through Covid, apart from running,” Sarai added.

“But it was a long time out of the gym.

“When I went back I wasn’t as into it as I had been and I went through a stage not knowing if I wanted to continue.

“Liam then asked if I wanted to box at Lonsdale and he was being really supportive about it, saying it would help bring back my confidence.

“I was a bit nervous as I wasn’t very consistent with my training before the competition.

Proud Mum Dhana Mackie added that she had to take a while to get used to her daughter boxing, but admits it has done wonders for her confidence.

“I was shocked when she came home and said she was going to try boxing,” Dhana said.

“After dancing competitively for 10 years it was a bit of a shock to me, although her Dad is delighted.

“It has taken me a bit of getting used to.

“She went from doing that to then being a member of the gym and Liam and the other coaches have been 100% behind her all the time, they have been brilliant.

“But if it had not been for the free sessions for the girls she wouldn’t be boxing right now.

“She started dancing competitively at the age of four and towards the end she lost her confidence.

“When she started the boxing she wasn’t a confident person, but within a few months she was so focused and training hard and knew what she wanted to do and her confidence really built up.

“Unfortunately, Covid then happened and it did affect a lot of people.

“During that time away from the gym she was a bit lost and didn’t know what to do.

“But she has got there now and there is a big difference to her confidence after Lonsdale.

“She is extremely focused now and she is clear where she wants to go from here, and it is to pursue as much as she can through boxing.”