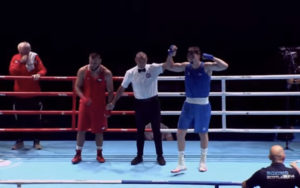 SCOTLAND will have two boxers in the Quarter-Finals of the IBA World Youth Championships after Kian Govan claimed victory on Day Six of the competition this afternoon.

The Doon Valley Heavyweight defeated David Polak of the Czech Republic by split decision in their 92kg Round of 16 contest in La Nucia to join Bantamweight Aaron Cullen in the next round.

The big Scot suffered a bloodied nose in the first round, both physically and on the scorecards as all five judges scored it for his opponent.

It was a competitive round in the second, with not much to separate the two Heavyweights, but again the Czech Republic boxer got the edge from three of the five judges.

But after two close rounds Govan took charge in the third round, landing jabs and straight right hands against his shorter opponent throughout.

With Polak looking to make the bout untidy in order to see the final round out, he was given a point deduction from the referee with just 20 seconds remaining. Unfortunately, Lightweight Isa Akram was unable to join him in the next round as he lost a unanimous decision to Carlos Jamil De Leon Castro.

The 18-year-old Scot had been aiming to avenge his defeat to the Puerto Rican from just six weeks ago, when the pair met in the Final of the Boxam International Youth Tournament, which acted as a warm-up for this competition.

Each round was still very competitive, however, and the Scottish southpaw will be able to take away a lot of great experience from the competition.