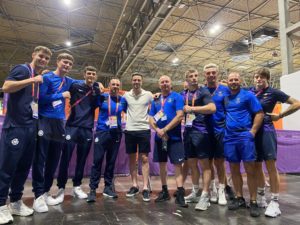 REIGNING Light-Welterweight World champion Josh Taylor says he jumped at the chance to come down to Birmingham and support Team Scotland.

The 2014 Commonwealth Games Gold medallist was in the front row at the NEC yesterday as Matthew McHale and Tyler Jolly made it five Scottish boxers to guarantee a medal.

The duo, along with Reese Lynch, Sam Hickey and Sean Lazzerini, will all be back in action tomorrow when they seek to secure a place in the Final.

Taylor’s Silver medal in Delhi in 2010 and Gold in Glasgow in 2014 are part of a rich 92-year heritage which has seen Scottish boxing medallists at every single edition of the Commonwealth Games – the only Scottish sport to have achieved that feat.

“I had the opportunity to come down to Birmingham and I jumped at it,” Taylor said. 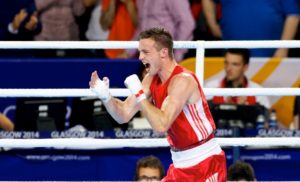 “Boxing has won medals at every single Games, and they have achieved it again today and yesterday.

“I wanted to come down and support the lads.

“Representing your country, I think, is the biggest honour of your career.

“Winning the medals for your friends, family and country is such a prideful moment.

“For me personally, even though I have done everything in the pro game, winning the Commonwealth Games was one of the proudest moments of my career and life so far.”

Taylor shared a hug with Matthew McHale, after the Bantamweight stopped Malaysia’s Ahmad Shaharom in the third round of their Quarter-Final contest to follow in his footsteps by becoming the latest Lochend boxer to secure a Commonwealth Games medal.

The Tartan Tornado had some advice for the five Scots who will all compete in tomorrow’s Semi-Finals.

“Just remember what you have done in your training and your preparations,” Taylor added. 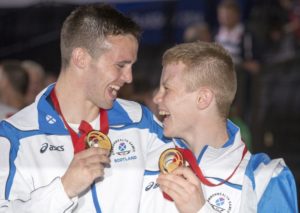 “This is the time to enjoy it, all the hard work is done, all the preparations are done – the torture, the pain, it is all done.

“This is the time to enjoy it, you are boxing in front of thousands of people and friends and family, so go enjoy it.

“Remember what you did in training and I’m sure you will have every confidence in yourself and let the performances talk for themselves.”

Lochend’s Matthew McHale admitted it was a great boost to the Scottish boxing squad to be performing in front if Scotland’s most decorated boxer of recent decades.

“It is brilliant,” said McHale, who will now box Northern Ireland’s Dylan Eagleson in his 54kg Semi-Final tomorrow afternoon.

“I get on well with Josh, but it is nice to see he is coming down to support all of the boys, not just me, all the boys.

“It gives you a boost knowing he has won this and is still looking out at the amateurs and the boys coming through.”