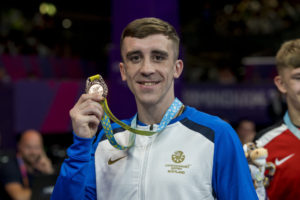 BANTAMWEIGHT Matthew McHale has said he has come to appreciate his Commonwealth Games Bronze medal.

The Lochend boxer was desperately unlucky to miss out on a place in the Final in Birmingham this summer, as he lost a razor thin 3-2 split decision to eventual 54kg champion Dylan Eagleson of Northern Ireland in the Semi-Finals.

It was the second bitter disappointment for the 26-year-old in 2022, as he also lost a 3-2 split decision to Italy’s Manuel Fabrizio Cappai in the Quarter-Finals of the European Championships in May in a bout which may thought should have gone the way of the Scot.

However, this time he did come away with a medal, with his Bronze being one of five won to make it the most successful for Scottish boxing in Commonwealth Games history.

“Everybody wants to get Gold so I’m not going to lie and say otherwise,” McHale said.

“And even after I won Bronze people were still saying how amazing it was, but you don’t look at it that way.

“That said, since I’ve been home and had time to think about things, I can now really see what a great achievement it is. I’m proud of myself.

“All the hard work paid off and to be fair, the semi-final was as close as they come so on another day, I could have got the decision.

“I did everything in my power to get the win so I wouldn’t change a thing.

“To be part of the most successful Scottish boxing team is just incredible.

“And even the ones that didn’t medal to see how they performed, we were all there for each other. We’re all one big team.

“The whole experience in Birmingham was just amazing. I loved everything about it. I tried to take it all in because it’s over in a flash before you know it. It’s something I will always treasure and a once in a lifetime opportunity.”

While fellow Commonwealth Games medallists Reese Lynch, Sam Hickey and Tyler Jolly are back in England training as members of the GB Squad in Sheffield as they take aim at the Paris Olympics in two years time, McHale’s future is less clear.

Much like Commonwealth Games Middleweight champion Sam Hickey, McHale’s 54kg Bantamweight division has been removed from the Olympic programme for 2024 to make way for more female weight classes.

“I need to sit down and have a chat with my coach Terry McCormack, but I’ve done everything I can as an amateur now apart from the Olympics,” McHale added.

“They’ve removed 54kg from Olympic boxing now so I’d have to go to 57kg if I wanted to be in with a shout of Paris in two years.