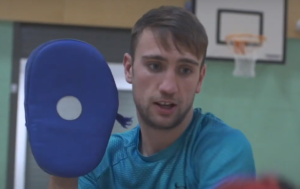 NORTH West Boxing Club Coach Kieran McMaster insists the importance of being a good role model for young people has never been more clear to him.

In addition to helping coach at the Kilmarnock based club, the 24-year-old works for East Ayrshire Council as a Sports Mentor.

Kieran has mentored some of the most vulnerable young people in East Ayrshire, using boxing as a tool to build meaningful bonds to allow challenging conversations to take place on topics such as mental health, drugs and alcohol.

The coronavirus pandemic has limited his ability to do his job as normal, however the accomplished boxer has still strived to support these young people over the past 14 months.

“This year has been a tough one, however, during these difficult times I have been able to continue my work with young people and the importance of my input has not been lost,” said Kieran.

“I am a consistent male role model for a lot of young people who might not have parents, or have Dads.

“I am someone who they see every week and I build positive relationships with them.

“But I’m not a member of staff, I’m Kieran McMaster the boxing coach, the kids respond to me different and they let me in.

“They need to see me once a week just to make their week feel normal,” Kieran added.

“I’ve been seeing some of these kids every week for the past one or two years. For some of them I am the only person that they trust.

“The last year has been stop start stop start. It has kept me physically out of the school, so it has made it difficult for me and the young people to keep in touch.

“I can only imagine the impact the pandemic would have on some of these kids being stuck at home.

“But I was able to speak to some of them on the phone and check in and see how they were doing and I was able to see some in the local community, although I wasn’t allowed to do boxing with some of them because of social distancing, but I still saw them and kicked a football about.

“I did some online boxing training videos too, similar to Joe Wicks, which were filmed and then were rolled-out throughout East Ayrshire and were getting used in class.

“I was really quite pleased with that, because I was worried how I might impact on the kids while I couldn’t engage in the schools.

“I did some fitness challenges too just so they knew we hadn’t forgotten about them during the pandemic.

“Over the past few months I have been back in the schools, but I am still very limited on how many schools I can attend.

“It has been a long tough year.”

Kieran admitted he never intended to go into coaching, instead focusing on his own promising amateur boxing career.

However, he first got involved as a teenager due to a shortage of coaches within the West District club and has excelled ever since, even being named Young Coach of the Year at the 2019 sportscotland Coaching, Officiating and Volunteering Awards.

“I boxed myself for North West Boxing Club,” Kieran explained.

“A couple of the coaches in the club left and then my Dad was asked if he could come in and assist the club.

“Another coach then left and my Dad was left with the whole club himself.

“Ray Connell then came in and helped the club get to the best that it had ever been.

“But because we only had two coaches I was asked if I wanted to my coaching badges just as a back-up and to help out for a bit of fun.

“I started helping out with the kids class and then the job came up with East Ayrshire Council.

“I did not expect to be a sports coach as I was planning to be a firefighter, but I am in a very lucky position. There is nothing like the Sports Mentor job.”