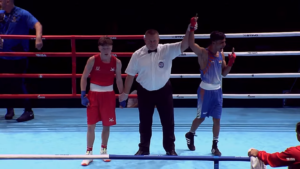 SCOTLAND’S Aaron Cullen suffered heartbreak at the IBA World Youth Championships this afternoon as he had a victory overturned to deny him a historic medal.

The Scot was awarded the Quarter-Final contest against India’s Ashish Ashish from three of the five judges at ringside, but a Bout Review – a new procure from IBA that has just been brought in for this competition – overturned the result.

The end result seems especially harsh as it had looked like Aaron had done more than enough to deserve to win the contest.

The Renfrewshire boxer landed a good straight right hand against his southpaw opponent early in the first round, in a round where both boxers had a high work rate, but the cleaner work was coming from the Scot, with a majority of judges agreeing.

Cullen controlled the distance and pace of the bout better in the second round as he used his jab a lot more, landing another good right hand at the end of the round to won it 10-9 from all five judges.

The only round that looked disputable was the third, with Cullen getting caught with a couple of shots before the final bell.

Unfortunately, IBA Bout Review 22, that can be activated if the scorecard is a 3-2 split decision, was initiated by the appointed Ring Observer and ultimately the result was reversed.

Cullen looked shocked upon the final result being read and will undoubtedly be incredibly disappointed in the manner of his exit from the competition.

But the 18-year-old can hold his head high after a fantastic 12 months in the ring, including his three bouts at the World Youth Championships, which has seen him win two Gold and two Silver medals at International events this year. 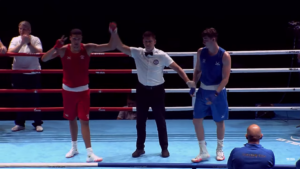 Unfortunately, Scotland’s other competitor, Heavyweight Kian Govan, also suffered defeat in his Quarter-Final to bring Team Scotland’s campaign at the competition to an end.

Unlike in Scotland’s other Quarter-Final bout earlier in the day, there was no disputing the result of this contest.

The English southpaw won each of the three rounds as he displayed good movement and footwork, while keeping the bout at long range with jabs and straight left hands.