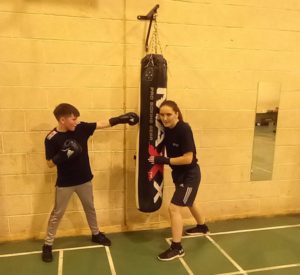 FORMER World Championship athlete Stephanie Kernachan has said she is “addicted” to coaching as she eyes a new long-term role in the sport.

The 29-year-old made history three years when she was part of Scotland’s first ever female contingent at the Women’s World Championships in New Delhi, India.

However the Motherwell native, who was also the first ever Scottish woman to win a GB Elite Championships, has transitioned to become a coach over the past couple of years.

Much like as a boxer, Stephanie is developing quickly as a coach and this year has been assisting Boxing Scotland as a coach on the Performance Pathway Programme.

“I always wanted to pass on a bit of my knowledge and experience in the gym,” Stephanie explained.

“I started by helping at Duries Boxing Club with coaching a couple of sessions.

“Stephen Newns used to let me come in at Cleland and help him coach a female class, boxercise class and a class with kids with additional needs.

“So I had experience of doing that.

“But it was more so in 2019 when I volunteered to help Stevie Morrison with a kids class at Falkirk Phoenix Boxing Club.

“I had already completed my Boxing Scotland Level One coaching course at that point.

“He was quite happy to have me on board to be able to provide his club with a kids class.

“Earlier this year I had the option of going through the Performance Pathway as a boxer or from a coaching perspective.

“During lockdown I did a Boxing Scotland Level Two coaching course which led me to try the coaching pathway.

“I am addicted and I am really enjoying the coaching side of things.”

This week marks the three-year anniversary of the 2018 Women’s World Championships where Stephanie made history alongside Megan Reid and Vicki Glover.

Although she lost her opening bout to Jang Eun-a of South Korea on a 4-1 split decision, Stephanie has good memories of the event.

While Stephanie sees her long-term future in the sport as a coach, she is not ready to rule out competing as a boxer just yet.

“Reflecting back on the World Championships, I feel my performance was good,” Stephanie added.

“To be away for a few years and try and come back, it is really really hard because people hold you to that high standard of a World Championship level athlete.

“But it is hard to get back up to that standard.

“I’m not in the High Performance Centre right now and around that level of training.

“Due to work commitments and other things I’m not able to fully commit to my own boxing.

“However, I still want to compete.

“I’m planning to get a couple of club show bouts in the meantime, and I have a bout on November 26th up in Elgin.

“That will get me back in and then I will have the answer myself whether I am going to keep trying to compete again, or whether I take a step back and focus on the coaching side of things.

“I am still relatively young for an athlete at 29.

“I love the sport and I love competing and a part of me does not want to give that up.

“But maybe that time is coming and I am preparing to make that final transition over to coaching.”

While Stephanie may be planning to hang up the gloves at some point in the future, she is proud of how female boxing has developed over the past 14 years in Scotland, to which her own achievements have played a significant part.

“I first walked into a gym in 2007 and at that point there was still quite a few coaches who were against female boxing,” Stephanie said.

“Now we have seven and eight-year-old girls coming into the gym, whereas before women were a lot older when they started.

“The sport has all changed in such a short period of time.”