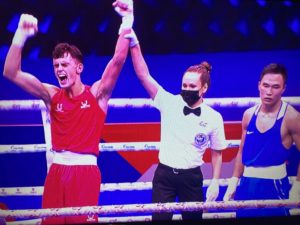 HISTORY maker Reese Lynch has stated there will be no slacking off as he sets his sights on more big prizes in the years to come.

The Fauldhouse native became the first ever Scottish boxer to win a medal at a senior World Championships, after claiming Bronze in Belgrade earlier this month.

“The Commonwealth Games is my next big goal,” said the 20-year-old Light-Welterweight, with the Games set to take place next summer in Birmingham, England.

“I’d like to think I’ve pencilled my name in with this medal but there is no danger of me taking it for granted or slacking off.

“I still need to give it everything and prove that I deserve my place.

“After that then the next big aim would be the Paris 2024 Olympic Games.

“That would be a real dream come true.”

The Rob Roy boxer carved his name into Scottish boxing history with three terrific victories en-route to the Semi-Finals of the competition in Serbia.

Reese started the competition with a bye in the first round of the 63.5kg category, before meeting Iran’s Ashkan Rezaei in the second round, where he secured a unanimous points victory.

Another unanimous victory would follow against Spain’s Adrian Thiam Creus in the last 16, before his Quarter-final split decision victory against Santali Toltayev of Kazakhstan which secured a medal.

Unfortunately, there was to be no place in the final as he missed out to Turkey’s Kerem Oezman to confirm it would be a Bronze medal coming back to Scotland.

“It’s a huge tournament so for me to go out there and get a medal just proves to me that I’m at that level where I can compete against the best.

“It’s also a huge moment for Scottish boxing. I’m delighted with the individual success obviously, but it’s just great for boxing in this country that someone was able to go there and get a medal.

“It just shows to the next generation of boxers what they can do because if I can do it then anyone else can.

“It was a huge confidence boost for me to go over there and perform so well.

“I was really pleased with my performances and to be fair even in the semi-final where I lost, there wasn’t much in it at all. Fair play to him, he caught me a good one at the start of the third but if it hadn’t been for that, it could have gone either way.”

However, the indelible image of the tournament belongs to Reese as he celebrated the victory over Toltayev which secured a medal, seconded by the sheer emotion also shown by national coaches Craig McEvoy and Mike Keane on announcement of his victory.

The former Springhill boxer was keen to pay credit to all of the people who helped him to get to this point.

Reese said: “There’s a lot of people who have given up time and effort to help me win that medal and it wouldn’t have been possible without them.

“My family, my brothers Dean and Ped. Everyone at Rob Roy and all the coaches who have pushed me to get better and the team at Boxing Scotland, which is a special group to be involved with.

“And the whole Fauldhouse community. They’ve been great with me ever since I got into boxing and have been hugely supportive. It’s great to be able to bring an international medal back to Fauldhouse.” 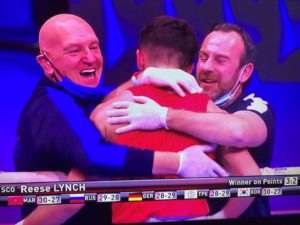